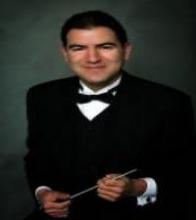 Mr. Perez is in his nineteenth year of teaching and is in his fourteenth year as Director of Bands at Kinard Core Knowledge Middle School in Fort Collins, CO.  Mr. Perez previously taught for five years in the Thompson School District at Erwin Middle School and Loveland High School.

Mr. Perez graduated from Loveland High School and received his Bachelor of Music Education degree from the University of Colorado. While at CU, he studied percussion with Doug Walter, conducting with Allan McMurray and Rob Carnachan, earned a Downbeat Magazine Outstanding Jazz Combo Performance award and was a concerto competition finalist on marimba.  Mr. Perez received his Masters degree in Conducting from Southern Oregon University.

Mr. Perez has had two master’s project published and featured in Band World Magazine (Oct. 2003 and April 2005).  He is a member of the National Association of Music Educators and the Colorado Bandmasters Association.  Mr. Perez is married to his wife, Jessica and has three children, Jackson (12), Sophia (11), and Micah (9).  Mr. Perez keeps up his musicianship by playing drum set regularly at church in Loveland and being a practice partner with his three Suzuki piano children.