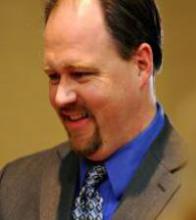 Mr. Wheeler has been teaching music and drama in Poudre School District since 1997 and is not only a native of Fort Collins, but a 5th generation native Coloradoan.  He earned is Bachelor of Music Education (BME) degree from Colorado State University and his Masters of Music (MM) from the University of Northern Colorado.  Scott served as the music teacher that opened the Traut Core Knowledge building in 1997 and later started teaching at Kinard Core Knowledge in 2004.  He was a part of the original staff that opened the Kinard building in 2005.  Mr. Wheeler is the only National Board Certified Music Teacher (NBCT) in Poudre School District, earning the distinction in 2018.  A singer, French hornist, actor, and musician, Mr. Wheeler has experience performing and working throughout the United States and Europe.  You may have seen Mr. Wheeler play the role of Shrek in 'Shrek the Musical' at the Fort Collins Lincoln Center in 2015 and recently performed at Vatican City and Rome in 2018.  When not at school, on stage, in an ensemble, or on screen, Scott's heart and home are with his wife, Jana, and his two kids, Joey & Marissa.